AUSTIN, TX -- The Tejano Monument, a multi-statue monument honoring the contributions of Texas early Spanish-Mexican settlers and their descendants, was unveiled today on the south lawn of the Texas Capitol grounds before local and state community and legislative leaders, including Texas Governor Rick Perry, Lt. Governor David Dewhurst, and Texas Supreme Court Justice Eva Guzman. The unveiling marks a 12-year effort by Hispanic business, education, and community leaders to honor early Spanish and Mexican pioneers that are seldom mentioned in Texas history. The monument is the largest of its kind on any state capitol grounds in the U.S. and will be seen by the more than one million people who visit the Texas State Capitol each year.

"It took more than a decade of hard work and dedication to make this monument a reality and we are so happy this day is finally here," said Dr. Cayetano Barrera, president of the Tejano Monument Board of Directors. "A chapter has been missing from Texas history, at the Capitol and in Texas classrooms, and today a very significant page has been added through the Tejano Monument. We hope the millions of early Tejano settler descendants will feel as proud as we do of this symbolic masterpiece." 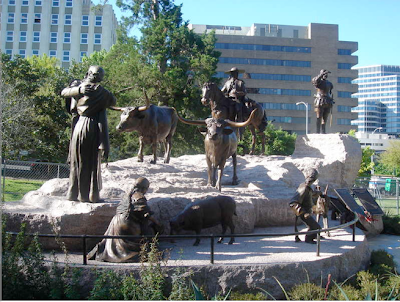 The history of the monument began in 2000, when a group of Tejano business, education, and community leaders formed Tejano Monument, Inc. and began formulating strategies on how to make the monument a reality. With support from state legislators, Representative Ismael "Kino" Flores and Senator Mario Gallegos, legislation was approved by the Texas legislature in 2001 and work began to raise the necessary funds to make it a reality. Over the years, other key state legislators joined the effort and included senators Judith Zaffirini, Leticia Van de Putte, and Juan "Chuy" Hinojosa, and representatives Richard Pena Raymond, Trey Martinez-Fischer and Ryan Guillen. The Tejano Monument board of directors and several committees were tasked with the job of raising awareness and funds to build the multi-million dollar monument and secured donations from a number of corporations and individuals to bring the monument to fruition.

"We traveled all over the state to meet with corporations and organizations to raise the necessary funds to execute all facets of the monument," said Renato Ramirez, CEO of IBC Bank - Zapata and VP of the Tejano Monument Board of Directors. "We are thankful to all the businesses and individuals who believed in our mission and helped to make this monument a reality through their financial contributions."

The statues that make up the Tejano Monument include a vaquero on his mustang, a Spanish explorer, a longhorn bull and cow, a couple holding an infant, a boy with a goat and a girl with a sheep. Five bronze plaques surround the monument and tell the story of the Tejano experience from the 1500s to present times. Celebrated painter, sculptor and educator, Armando Hinojosa of Laredo, Texas, was the artist behind the design and construction of the monument.

During the monument's groundbreaking ceremony in January, Walmart presented a $100,000 donation to fund a one-year curriculum development and implementation project with an educational purpose to improve the understanding of Tejano history among elementary school youth. The educational initiative, named the Tejano History Curriculum Project, involves collaboration between the Tejano Monument, University of Texas, Walmart Foundation, Austin Independent School District, and City of Austin's Parks and Recreation Division.

In addition to the unveiling ceremony, several events have been scheduled throughout the weekend to help commemorate the occasion and celebrate Tejano history. On Friday, March 30, a Tejano Monument Conference will be held at the State Capitol that is open to the public and involves 20 presentations on topics such as early colonial Texans and Tejanos in the 20th century. A Tejano Monument Parade is also scheduled for Saturday, March 31 on Congress Avenue that will celebrate the contributions from Tejanos in Texas's history and culture. To learn more about these events, visit http://nosotroslostejanos.com .