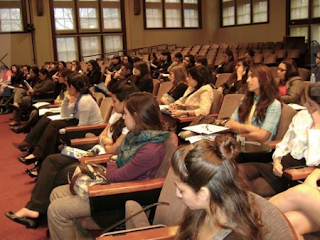 In the nation's public schools, Hispanics also reached new milestones. For the first time, one-in-four (24.7%) public elementary school students is Hispanic. Among all pre-K through 12th grade U.S. public school students, a record 23.9% were Hispanic in 2011.

In both cases, rapid Hispanic population growth has played a role in driving Hispanic student enrollment gains over the past four decades. However, population growth alone does not explain all the enrollment gains made by Hispanic students in recent years. Today, with record high school completion rates, more young Hispanics than ever are eligible to attend college. And among these high school completers, a record share----nearly half (46%)----is enrolled in a two-year or four-year college.

In addition to gains in enrollment, the number of degrees awarded to Hispanic college students has also reached new highs. In 2010, 140,000 bachelor's degrees and 112,000 associate degrees were awarded to Hispanics. In both cases, Hispanics are a growing share of all degree recipients----13.2% among those with an associate degree and 8.5% among those who received a bachelor's degree in 2010. Despite these gains, the Hispanic share among degree recipients significantly lagged their share among 18- to 24-year-old students enrolled in two-year colleges (21.7%) and four-year colleges and universities (11.7%) in 2010.

The Pew Hispanic Center, a project of the Pew Research Center, is a nonpartisan, non-advocacy research organization based in Washington, D.C., and is funded by The Pew Charitable Trusts.
Posted by POP-9 Communications